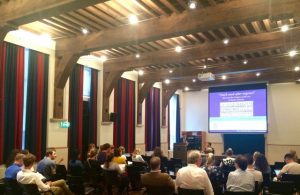 The 23rd Amerikanistendag was held in Amsterdam on 2 June 2017, and brought together young Americanists from the Netherlands, Germany, France, and the U.S. The University of Amsterdam, Leiden University, Rijksuniversiteit Groningen, the University of Utrecht, Radboud Universiteit Nijmegen, and the Roosevelt Institute of American Studies were all represented. BA students, MA students, and PhD candidates all presented findings from their recent work. (The courage displayed by BA students deserves special mention in this regard) 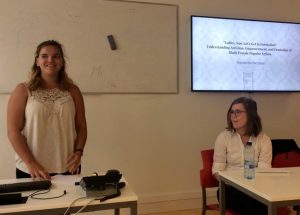 Damian Pargas’s keynote lecture—“‘Stark mad after Negroes’: Slavery and the Origins of Racism in Early America”—opened the day with a lively inquiry into some fundamental questions about the history of racial slavery: what weight to give economic explanations as opposed to cultural explanations, and how can a historian track between these modes? His lecture was itself a compelling demonstration of method. He elucidated classic economic accounts of slavery’s rise and illustrated the limits of those accounts; he gravitated toward cultural and even psychological history to isolate the centrality of race, and to illuminate race’s relation to an economic system that was always in crisis or on the brink of it. The lecture was valuable for the seasoned scholar, but well-tailored to young scholars as well.  The keynote took place in the handsome Doelenzaal of the University of Amsterdam’s library. 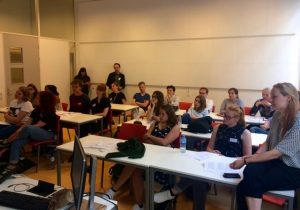 From there, the Americanist caravan moved toward the Oost-Indisch Huis, a labyrinthine building, and the former headquarters of the Dutch East India Company—a fine and probably ironic setting for pondering the American present, past, and imponderable future. The rest of the day saw panels of 3-4 aspiring scholars presenting on an astonishingly wide-ranging set of issues. The result was an eclectic buffet of Americanist scholarship, including an investigation into the ‘santuary churches’ that sheltered immigrants in the 1980s; a history of the U.S. base on Okinawa; studies of empowerment and feminism among black female popular artists (‘Ladies, now let’s get in formation’); the American Socialist Party; representations of American identity in the work of Paul Verhoeven, and much, much more. Overall, the day represented a wonderful opportunity for students at every level to share their work among an audience of peers. And one thing is certain: that the future of American studies is more than secure in the hands of a new generation of scholars.