On December 14, 2018, Americanists and non-Americanists gathered in Amsterdam for a special symposium on the Future of American Studies in the Netherlands. The full program can be found here. There were valuable contributions from across the generations, as it were, from very recent PhDs to senior scholars. Contributions came too from within and beyond “American Studies” proper, including other scholarly fields and Dutch Ministry of Foreign Affairs. The day was also, just as importantly, a multi-national symposium. That internationalism emerged, paradoxically, as the most distinctive element of American Studies in this country.

Topics ranged from the practical to the theoretical to the pedagogical to the existential. Aynur Erdogan’s reflections on the hard facts of post-PhD employment and Albertine Bloemendal’s navigation of different disciplines since completing her own PhD illuminated powerfully the situation of young scholars now.

The symposium also grappled productively with, broadly speaking, the politics of American Studies. Laura Bieger described the co-existing strands of Americanist scholarship: an activist impulse alongside a hermeneutic impulse. Markha Valenta positioned a radical practice of American Studies *now* in a dialogue with the field’s earlier crystallization in the “(selectively) liberal international order,” just as that order collapses. Thomas Doherty, on a Fulbright from Brandeis to RIAS, offered a critical account of the American Studies Association’s boycott of Israeli academic institutions. That bitter debate typified the ideological drifts of American Studies in the US circa 2013. Our own symposium, fortunately, avoided re-arguing the issue: the discussion demonstrated the different preoccupations of American Studies in Europe. A live wire there is not necessarily a live wire here.

“Turns” abound: the “cultural turn” is no longer controversial; the “transnational turn” still shapes Americanist employment and Americanist quests. I found the transgenerational dialogue particularly valuable. Rob Kroes offered an elusive yet profound characterization of the Americanist endeavor. (It defies easy summary but I will try anyway.) American Studies in Europe has offered to the humanist a particular intellectual freedom, and even a supranational transcendence. That freedom depends on seeing “America” as fundamentally a myth: ever-present yet ever-escaping, ever-vanishing. To be an Americanist in Europe is to realize that America (whatever we mean by that word, for it is not a single thing, or even a thing at all) has already shuffled cultural hierarchies, has deconstructed us before the deconstructionists gave deconstruction a vocabulary.

Then came the caution: we should not let our gaze drift phototropically toward America as if America were the sun and we were plants. Nay, we should re-root ourselves where we are, and yet at the same time (to use another metaphor) embrace our “rudderlessness.” American Studies in Europe has a long tradition, after all, of doing precisely that! One might detect an anti-politics in Kroes’s characterization: while minefields abound in American Studies in the U.S., the Americanist in Europe has the sensation of walking (at least provisionally) in a field without mines. Yet it was only a seeming anti-politics, for Kroes’s reflections culminated in a contemplation of fascism and democracy, and of literary and political projections in an era of disaster. What if our founding Americanist text were Berthold Brecht’s The Resistible Rise of Arturo Ui? 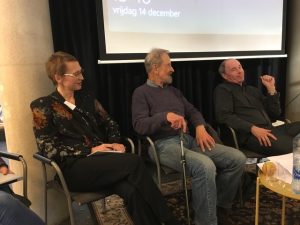 This raised some questions for us: does that project depend on being outside the US, literally or figuratively? Has it always depended on being outside? Is it, now, only possible in Europe? Is it institutionalizable?—or does it remain something like an Americanist’s gnostic gospel or secret code?

(I kept a tally of texts that were mentioned throughout the day, curious what sort of de facto canon might emerge. Kroes drew on Brecht and, cheekily, on Jacques Derrida. There were shadows of Alexis de Tocqueville in Laura Bieger’s reflections, and the spirit of Umberto Eco’s Travels in Hyperreality in Jaap Kooijman’s discussion of the Americanist presence in media studies and vice versa. Markha Valenta invoked both Walter Russell Mead and CLR James. Neil Postman’s Amusing Ourselves to Death made a cameo in Albertine Bloemendal’s presentation. Not a bad start.)

There were other lines of thought throughout the day about justification and pedagogy. What, really, are our responsibilities to our local publics, or our broader European publics? Frank Mehring’s well-wrought traveling exhibition about the Marshall Plan offered a good example, speaking to the transatlantic past and the European present. (Broader question: do we accommodate or resist austerity-driven imperatives of “valorization” and “efficiency”?) It was instructive and inspiring to hear about pedagogies across Dutch universities. Language: Marietta Messmer spoke for a multilingualism in American Studies, and unveiled the Spanish-language curriculum in Groningen’s American Studies department. She positioned that endeavor in a world in which borders are paradoxically strong and weak. University colleges remain a valuable but too often untapped and unrecognized arena for American Studies scholarship, as Nancy Mykoff reminded us.

The symposium closed with new directions in Americanist research: in the same panel as Marietta Messmer’s hemispheric American Studies came the surprising details of Dario Fazzi’s investigations into U.S. military bases in Europe, a sharp glimpse of “the everyday nature of American empire.” Maarten Zwiers and Maarten Arnoldus made a call for the rural, both the real rural of American politics and the pseudo-rural of mythology and mass-media.

We also took the occasion of the symposium to recognize Hans Krabbendam, former NASA treasurer, historian of religion and immigration, stalwart Americanist, and all-around mensch.

I’ll close this report with two of the practical suggestions that emerged. First, we’d be wise to conduct an Americanist census in this country. More on that in time. There was also unanimous support for Laura Bieger’s call for a revived annual publication (let us call it the NASA Review), a publication that would channel what she described as a downright utopian cross-national possibility in this country. Hear, hear.

Thank you to all who participated.