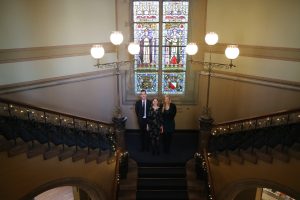 On January 6th Lisanne Walma successfully defended her dissertation: Between Morpheus and Mary: The Public Debate on Morphine in Dutch Newspapers, 1880-1939 at the Academiegebouw in Utrecht. Her dissertation focused on the development of the Dutch public debate on morphine between 1880 and 1939. Around 1900 morphine was known on the one hand as a medical ‘Morpheus’: an important painkiller. On the other, people knew the substance as ‘Mary’, a street drug used and sold nonmedically. Between 1900 and 1939 concern about the nonmedical use of narcotics greatly increased. Through an analysis of Dutch digitized newspapers and a comparison with the debate on cocaine and heroin, she showed how morphine kept its medical reputation during this time.

The dissertation was supervised by prof. dr. Toine Pieters and dr. Hieke Huistra.