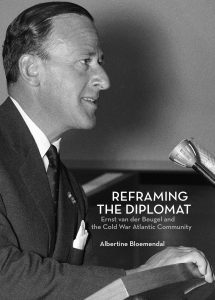 On September 6, 2017, Albertine Bloemendal defended her dissertation on the Dutch diplomat, politician, businessman, and scholar Ernst van der Beugel (1918-2004) at Leiden University. The defense took place before a full audience in the grand auditorium of the university’s academy building, illustrating the interest in Van der Beugel’s wide-ranging career.

The dissertation was made possible with the support of Van den Berch van Heemstede Stichting and presents research that covers a truly impressive number of national archives and private papers, as well as interviews with people from Van der Beugel’s personal network, such as former secretary of state Henry Kissinger.

Ernst van der Beugel’s long career placed him at the center of a network of elites, which formed an “Atlantic Community” that shaped Euro-American relations during the Cold War and beyond. Albertine’s study goes back to Van der Beugel’s formative years during the crisis years before World War II and then traces his growing influence as a Dutch government official in charge of the Dutch Marshall Plan Bureau, followed by positions at the Ministry of Foreign Affairs. During the 1960s, Van der Beugel moved from the public to the private sector when he became president of KLM and then took a position as professor of Post-War Western cooperation at the University of Leiden. Throughout this time, he maintained his influence through a more informal approach to diplomacy and through his position as Secretary General of the well-known Bilderberg Meetings. 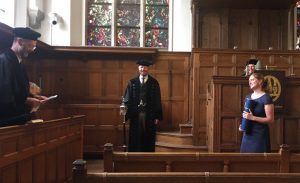 As such, this study does not only complete the historical record with a much needed analysis of one of the Netherlands’ most influential Atlanticists, but also enhances our understanding of the intricate ties that bound the transatlantic world together in the aftermath of World War II. Based on insights from the field of New Diplomatic History, which seeks to move beyond the traditional state state-centered approach, the thesis traces Van der Beugel’s influence by moving smoothly from the spheres of formal diplomacy to business, politics, and interpersonal connections.

Albertine presented an excellent defense of her work. Her insight into the continuities between the formal and private spheres of diplomacy were a testament to exciting new directions that the field is taking.