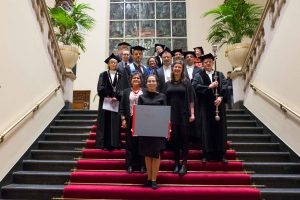 In November 2018, Groningen University PhD candidate, Aynur Erdogan successfully defended her thesis titled The American Kaleidoscope of the Orient: Representations in Early American Print Culture. In it, Erdogan combines a number of studies on early American culture, European as well as Eastern literature, and philosophy with research into textual mobility, American periodical, and print culture, so to make the case that imagined Orients became an analytical tool to nuance current domestic and foreign political debates that characterized the decades of instability in the eighteenth and nineteenth centuries. 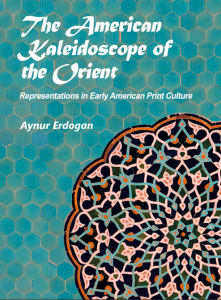 This thesis cuts across established academic disciplines and uses the kaleidoscope as a productive model to debunk generalized ideas put forward by other scholars and navigate through the complexities of ideas about the Orient in early America. The kaleidoscope combines research into textual mobility and meaning making processes that were shaped from within the ideological, political, and cultural contexts. Therefore, a blend of methodologies―building on knowledge and concepts from distant disciplines like biology and linguistics―and the kaleidoscope as a tool for cultural analysis will provide a rigor with which to approach abstract and sometimes elusive aspects of cultural material.

The thesis intends to give a sharper and empirically-derived as well as -driven understanding of many voices; that is, the roles the imagined and sometimes geographical Orients played in the broader cultural, ideological, and political contexts of late colonial as well as early American culture. The goal is to showcase the scope of what the Orient came to mean transcending narrow systems of meaning.