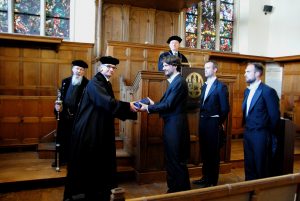 In the beautiful historic Academy Building at the University of Leiden, Mark defended his research smoothly, confident and clearly. The Thesis committee existed of famous researchers in the field, including Kees van Minnen and Richard Folett, and all complimented Mark on his well-written and deeply researched dissertation. – Karin Lurvink, VU University Amsterdam.

About The Politics of Terror: Enforcing Reconstruction in Louisiana’s Red River Valley: 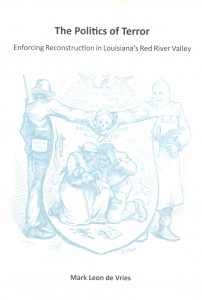 Taking Louisiana’s Red River Valley as a case study, The Politics of Terror explores the dynamics and experience of incessant political violence that characterized local Reconstruction politics in much of the cotton South.

Emphasizing the fundamentally contested and anarchic nature of these local politics, it shows how control over the day-to-day levers of power was often more important than the formal outcome of institutionalized political processes.

At the same time, these localized struggles over political, economic, and racial control both reflected and influenced the developments of Reconstruction on a national scale. This thesis also deconstructs the highly moralized narratives imposed on Reconstruction by both Dunningite and Revisionist historians.

Southern whites were hardly the innocent and set-upon victims of a few conniving whites who manipulated hordes of ignorant former slaves; but neither were the white and black Republican leaders universally high-minded and idealistic prophets of the twentieth century civil rights movement. The story of Reconstruction, in fact, boasts few heroes and offers little comfort to those who conceive of American history as a uniform march towards progress.