“North Dakota? Why there? This is the question I often got when telling friends and family about spending part of my summer in Medora, North Dakota. And I can’t blame them. Little did I know about this beautiful state in the north until I won the Theodore Roosevelt American History Award. This came as a total surprise to me. Therefore it was even more special that a few weeks after winning the prize I took off to a place some people know as ‘flyover country’, but to me was one of the most special places I have ever been.”

Queeny had a great time in TR’s former ranching grounds in the Badlands. “Medora is a truly hidden gem,” she mentioned in her travel report. In addition, she was impressed that “the people [she] met in Medora were so warm-hearted and kind. [She] can only recommend others to go off the beaten track and spend some time here.” To read more on this annual award and Queeny’s trip, see here. To read her travel report, see here. 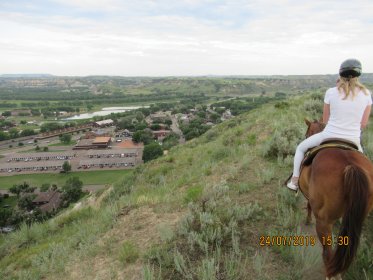 The RIAS would like to thank the American hosts in North Dakota and the American Embassy in The Hague for their ongoing support, financial and in kind, to make this trip to the US possible.