On 7 June 2019, the honors of kicking off the Amerikanistendag, or the National American Studies Day went to Tim Jelfs, of the organizing committee, George Blaustein, president of NASA, and Laura Bieger, head of the department of American Studies at Groningen University. They pointed out, rightly so, that this year’s turnout had exceeded everyone’s expectations and that it was especially pleasing to see so many BA students on the program. For many of them, this conference will have served as a kind of initiation into the world of academia – and hopefully motivate them to share their research more widely, now as well as in the years to come.

After a word of welcome, NASA treasurer Dario Fazzi announced the happy news that NASA’s finances were sound, and that the jury had decided on a winner of this year’s Theodore Roosevelt American History Award, which has been awarded every year since 1987 to the best MA thesis in American history, politics, and culture written in the Netherlands. This year’s winner is Queeny van der Spek, with her thesis titled “Hitler’s Gift to America: The American Motivations to Rescue Displaced Scientists from Europe in the 1930s” Queeny has won a trip to North Dakota, to explore the state that played such an important role in Teddy Roosevelt’s life. This year’s second price was won by Lennart Bolwijn, with his thesis called “Dogma, Romance and Double Consciousness: The Dilemma’s of the New Negro Generations Through the Travels of Otto Huiswoud and Claude McKay.” Lennart has won a subscription to Elsevier magazine, who sponsor the prize. Both Lennart and Queeny are students at the UvA. 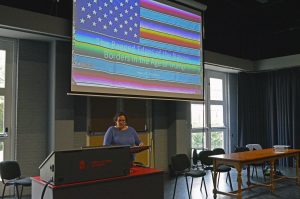 The conference’s keynote lecture was given by Anne Martinez who is assistant professor at Groningen. She presented her own family history that exposed the longevity of racism against Mexican-Americans in the United States, and its continuity in the present moment. She ended her talk by dwelling on a quote from Salman Rushdie’s book Step Across This Line, and  the notion of unmaking one’s bid for ‘freedom,’ out of sheer disillusionment with the racism, poverty, and disenfranchisement that target immigrants and their descendants. 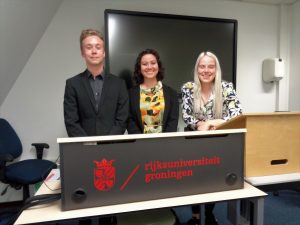 The rest of the program featured no fewer than 27 speakers, spread out over three sessions, in three parallel panels – from BA students to PhD candidates. Topics ranged from media and politics, to protest movements, science fiction, popular culture, and analyses of migration and identity formation. After these dense, and expertly managed presentations, the bar was opened for some well-deserved drinks. And no conference is truly over before the final glass is raised at the conference dinner, which was organized at Huize Maas.

NASA would like to thank all participants and attendees who made the conference such a roaring success – especially the team at Groningen and the study association EPU!

You can view the program at: Program Amerikanistendag 2019