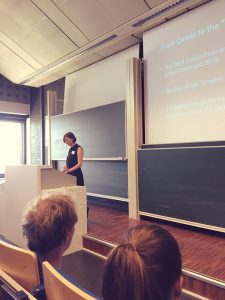 On Friday 10 June 2016, the 22nd Amerikanistendag (or American Studies Day) took place at VU Amsterdam. After a welcome by Professor Diederik Oostdijk the keynote speaker was introduced: Dr. Erin La Cour. She is a lecturer in Creative Writing at VU Amsterdam and in Comparative Literature at Utrecht University. Her keynote speech “From Comix to the ‘Graphic Novel’: The Politics of American Comics” traced the birth and mainstream success of “graphic novels” in America to their origins in the underground alternative Comix movement of the 1960s and 1970s. Although many people in the room were not familiar with the term “Comix” or with graphic novels at all, La Cour made for an interesting keynote speech because of her enthusiasm and her extensive knowledge about the subject. After her lecture everybody knew a little more about graphic novels and its complicated,  but fascinating, roots. 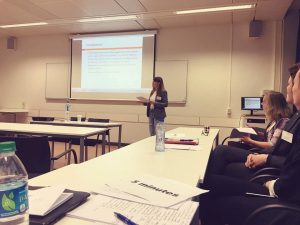 After the keynote speech a short coffee break was scheduled so everybody could recharge for the first round of parallel sessions. There were two more parallel sessions after the first one, each with different subjects. To get an idea of the wide range of subjects during this day, a quick look at the titles of the different sessions is enough:

From this list it’s clear that American Studies don’t shy away from an interdisciplinary approach to research. And precisely that makes the Amerikanistendag so interesting. Meeting scholars with different backgrounds, from history and economics to film and music, is really an enriching experience. The informal sphere also makes it easier to engage with people you’ve never met before and in this way you gain plenty of new insights and ideas. It was an interesting, enriching and instructive day!