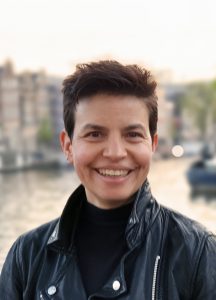 Markha Valenta is an interdisciplinary scholar – working at the intersection of politics, anthropology and history – whose work addresses the ways globalization is transforming society and democracy. Her work is comparative, with an emphasis on the United States, the Netherlands and India. Core concerns include the (geo)politics of public religion, migration, citizenship and world cities. In past research and publications, Markha’s work has addressed these issues with particular attention to the diversity politics of the Cold War; the Catholic Worker movement; Dutch debates on Islamic headscarves and on Jewish and Muslim ritual slaughter; the forgetting and commemorating of Dutch slavery’s violence in the Caribbean; the historiography of Muslims in India; and the future of American Studies as an academic field. Currently, Markha’s research focuses on two projects: one entails a comparative study of illegalized migrant citizenship in New York City and Amsterdam – relative to issues of geopolitics, mestizaje, political community and the desecration/sacralization of the state system – and the second studies the politics of religious architecture in Amsterdam/Mumbai/New York.

Following postdoctoral work at the University of Amsterdam and work on religious pluralism for the Dutch Scientific Council for Government Policy (WRR), Markha joined the program in American Studies at Radboud University Nijmegen in 2012. While there, she taught US international relations, democratic politics and history. Starting in 2014, Markha directed the American Studies BA program, its collaboration with Cultural Studies and the internationalization of the English department program. In September 2019, Markha moved to University College Utrecht in order to develop a new Community Engagement Platform for UCU faculty and students. At UCU, Markha teaches on the politics of migration and on modern entanglements of religion, state formation and (geo)politics.

In the spring of 2021, Markha will be an Urban Fellow at the Netherlands Institute for Advanced Studies (NIAS).