“Forging the American Century: World War II and the Tranformation of US Internationalism”

On October 27-28, Radboud University Nijmegen hosted an international conference to explore the outlines of the “American Century” since World War II. In light of contemporary concerns for the United States’ changing role in the world, conference participants sought to apply developing insights into the nature of international relations to revisit the postwar foundations of America’s global hegemony.

Mr. Adrian Pratt of the U.S. Embassy formally opened the conference on Thursday afternoon and was followed by Dr. Justin Hart (Texas Tech University) who presented the first keynote lecture on “Realizing the American Century: World War II as a watershed in U.S. internationalism”. Dr. Hart argued that the New Deal approach to governance cemented the wartime transformation of U.S. foreign relations. While international security policy came to reflect FDR’s Four Freedoms, Truman’s campaign for Universal Military Training was meant to ensure that U.S. global responsibilities would be distributed evenly across the nation. 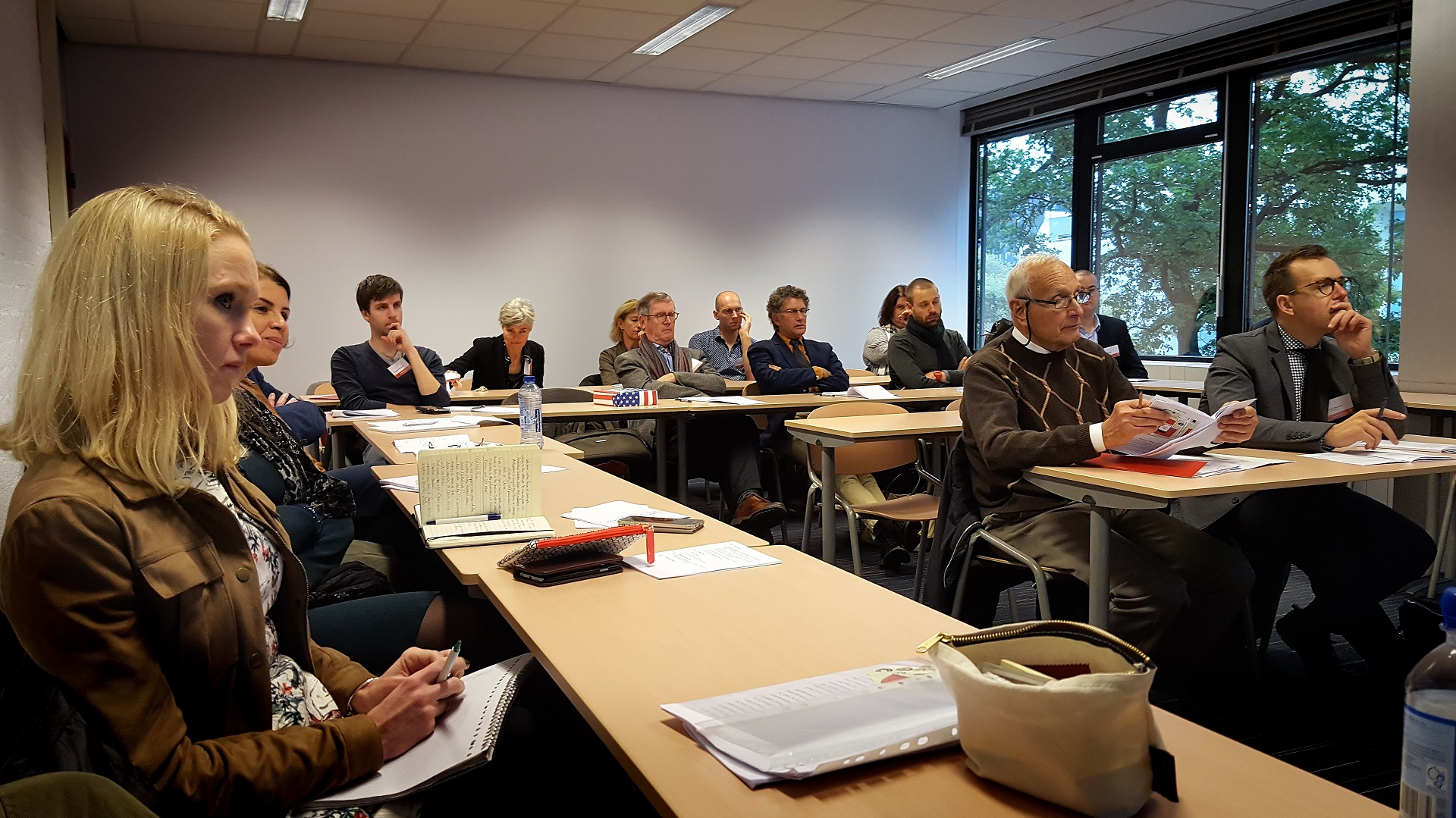 The day continued with panels in which scholars in the fields ranging from history to cultural and literary studies presented their research projects. The first panel on Thursday offered analyses of little researched domestic groups who offered alternative visions of post-war reconstruction. In his presentation “Aryans and Anglo-Saxons: Segregationist visions of the postwar world”, Maarten Zwiers (University of Groningen) demonstrated how segregationist politicians influenced policies toward European reconstruction and displaced persons. Hans Krabbendam (Roosevelt Study Center) traced the efforts of American Protestants to strengthen Christianity in Europe after the war in his presentation “’A Grand Opportunity’. American Protestants and the reconstruction of Europe, 1940-1960”.

The second panel dealt with the international activities of two American literary critics and authors. In “Malcolm Cowley, ‘American Books Abroad’ and Perspectives USA” Hans Bak (Radboud University) traced Cowley’s efforts to correct the perception of American culture as shallow commercialism, while legitimizing its status as a bulwark of the “free west”. Louis Mazzari (Bogazici University and City University of New York) analysed Philip Wylie’s dispatches from the “Cold War fronts” in Asia and Eastern Europe in his talk entitled “A Herald of the American Century: Philip Wylie’s Innocents Abroad”.

The final panel on Thursday included three speakers. Giles Scott-Smith (Leiden University), in his presentation “Selling a New World Order: The United Nations Information Organization (UNIO) in WWII”, discussed the development of the UNIO (and its wartime predecessors) from one headed primarily by the British and focused on allied war aims, to one headed mainly by the Americans and preparing for peacetime. In “Embodying the American Century: A transnational approach to the U.S. military presence in Europe from the end of WWII to the end of the Cold War”, Dario Fazzi (RSC) set out his innovative approach to assessing the impact of American military bases in disseminating the American way of life. Finally, George Blaustein (University of Amsterdam) made his argument for an “Americanist Century” based on his reading of the works of anthropologists Margaret Mead and Ruth Benedict in “National Character in the Americanist Century: Japanese antique, Neo-Melanesian modern, and our own bewildering country”.

On the second day of the conference, Professor David Ellwood (John Hopkins University SAIS Europe, Bologna) and Professor Bruce Kuklick (University of Pennsylvania) each gave a keynote lecture. In his talk on “The Force of American Modernity: WWII and the Birth of a Soft Power Superpower”, Professor Ellwood demonstrated that the American Century can be characterized by the force of America’s impulse to innovation around the world. Professor Kuklick closed the conference with his presentation “Fascism comes to America”. While dismissing the facile comparisons to fascism in political rhetoric, Professor Kuklick engaged the audience in a discussion about a long tradition of fear in American culture for fascist subversion. 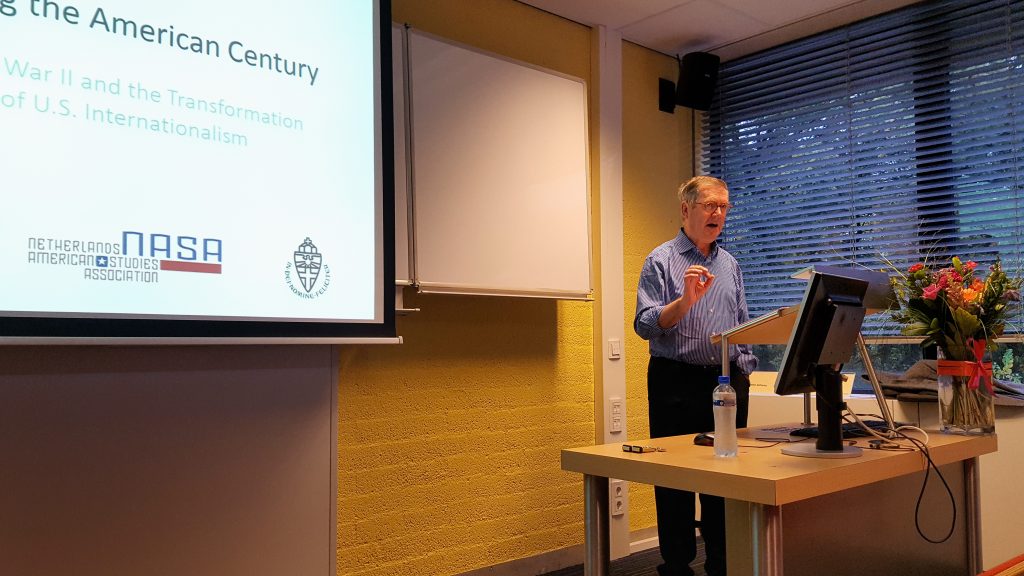 The second day of the conference also offered three workshops, starting with presentations on the Reagan Era. Beerd Beukenhorst (John F. Kennedy Institut) analyzed the dilemmas that Desi Bouterse’s Surinam posed to U.S. policies in the War on Drugs and the Cold War in “Negotiations and narcotics: Fears and anxieties in the American Century”. With “Remembering and reinventing history – How President Reagan publicly reflected upon and remembered the Second World War”, Jonathan Verwey presented his interdisciplinary project on Reagan’s attempts to mold the memory of the war during his campaigns and speeches.

During the final workshop, Dr. Cristiana Pagliarusco discussed the work of Georgia O’Keeffe, who was part of a transnational network of artists and intellectuals, in her talk on “’The Midwestern vibrant fist’ of American Art: The affective community forged by Georgia O’Keeffe”. Professor Frank Mehring (RU) analyzed U.S. diplomacy, the role of (German-American) cultural mediators, and developments in European receptions of American art in “Advancing American Art and the Struggles of Cultural Diplomacy”.

Conference participants and observers were able to cross disciplinary boundaries and extend their international networks while developing their own research on the multisided efforts of the United States to forge connections with the world. The organizers would like to thank the U.S. embassy, the Netherlands American Studies Association, and the International Office and Department of English Language and Culture at Radboud University for their contributions to this project.